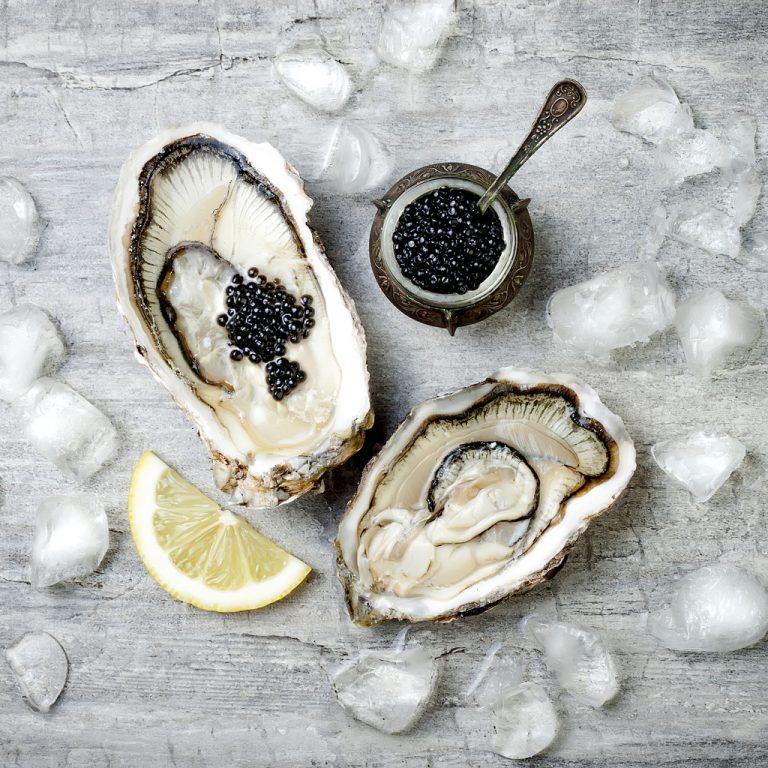 Casanova reportedly ate several dozen oysters daily and was reported to be the most famous lover of all time. Although he was actually Italian most people think he was French. He in fact spent most of his life in France seducing many maidens in the Royal court.

For centuries many have debated as truth or myth the fact that oysters are an aphrodisiac. The oyster lover will always agree, the oyster hater will always refute the claim. The problem for the poor old oyster in claiming its well-deserved title, is that eating one can be quite a disconcerting experience for the not so seasoned gourmet. The taste and texture are most definitely an acquired taste and if eaten at the wrong time of the year when they are slightly milky, the virgin oyster eater may never wish to repeat the experience.

However, when eaten in season with a few condiments to ease the novice on board, they are quite simply an experience, the very thought of which, will cause the thinker to salivate with all the gusto of a ravenous canine. Many gourmets throughout history report them as being the ultimate hors d’oeuvres and no food can compare to them for setting the gastric juices flowing.

Ok, you say, they still look like something an emphysema patient coughed up. There is an alternative for those of you who want the effect but just can’t endure the oral sensation. It’s called oyster extract powder and it is available at a web site near you.

So what is it and what does it do?

Usually, but not always, it is the dried meat of the oyster, which is then powdered and put into a capsule. Some brands include the shell and are of very dubious quality. Others are in pill form where half the pill weight is made up of bulking agents and excipients of no nutritional value whatsoever. Some however are from very reputable sources and contain all the ingredients of the fresh oyster, minus the taste and texture of course.

Are all brands the same?

Very few of the oyster extracts available really measure up however in terms of potency and this is because the oysters are harvested at times of the year when the oysters are very full of glycogen starch. This leaves very low concentrations of trace minerals and as such they lack potency. These tend to be the cheaper brands from China, New Zealand and Japan. Others recognize this fact and harvest when trace elements like zinc are at their maximum and these oyster extracts are very powerful and closest to the raw oyster in effect.

It is the trace elements that give the oyster its potency and in particular the trace element zinc. Oysters are the highest natural source of zinc and they accumulate large quantities of it to help regulate certain physiological functions unique to the oyster. Science remains unclear on the exact functions but the levels of zinc are certain.

In relation to men’s sexual health, the prostate gland contains more zinc than any other organ in the body – zinc deficient men develop a condition called hypogonadism in which the testicles shrink and loose function. Zinc contributes to the maintenance of normal testosterone levels in the blood & to normal fertility and reproduction. Zinc supplementation has been shown to increase free testosterone levels in the blood which may increase libido, reduce fatigue, and may improve overall sexual health.

Another interesting aspect of this zinc is that sperm contain very high levels of zinc, 700 times more than in blood plasma. Again, the reason for this is unclear but with every ejaculation an adult male loses approximately 0.7mg of zinc per ml of semen. Therefore, each ejaculation can result in a loss of several mgs of zinc for the adult male. The cumulative effect can be a decrease in overall libido if suitable replenishment of zinc is not observed.

So, while it is this high level of natural zinc that can enhance the sexual vigour by way of free testosterone, it also plays a role in testicular and prostate health resulting in fuller ejaculations which ultimately enhance sexual wellbeing.

What about other sexual health supplements?

While many of the herbal supplements on the market report sex enhancing benefits, none can compare to the oyster for nutrient values specific to men’s sexual health. And while many of the synthetic sex enhancing drugs of the Vxxx genre make wild claims none can replace the nutrients the body loses during sexual intercourse.

The world is your oyster!

Oyster extract contains high levels of zinc making it a very clear contender to be the supplement of choice for those seeking good sexual health. I believe this to be the best way to supplement zinc in your diet. It contains not only very high levels of organic zinc but trace elements such as copper, selenium and iodine as well as vitamin B12 our bodies need. All these minerals are already bound in amino acids ready to go to work in our bodies. Four capsules of a good quality oyster extract will provide roughly 3mg of top-quality zinc. This is a safe supplemental amount. Be sure to source a brand of reputable quality and origin, and one that shows respect and knowledge of the micro nutrient levels in the finished oyster extract. Always check the amount of zinc with the manufacturer before you make a purchase. Not a substitute for a varied diet.